Advanced gameplay is made up of the strategies that advanced players use to improve their gameplay in a match. These strategies are the key to becoming a successful slay.one player. If used correctly, they will greatly improve your gameplay and overall performance. Top players are the top players because their strategies give them an edge. Advanced strategies in slay.one focus on dying less rather than being hyper aggressive and killing more people. While there is a time and place for aggressiveness, going out of your way to kill people can often expose you to attacks and make you an easy target. Thus, it is better to go 10-0 in a match than 15-3. This shows a much more solid playstyle, one that leaves no gaps in your defenses. There are many tactics that one can use in order to improve their skill in matches and they will be described below.

These strategies focus on how you play Slay.one, and can be applied to your overall gameplay. 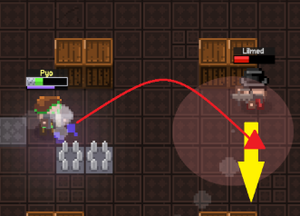 Prediction is quite literally the most important strategy in slay.one. It is practically a prerequisite for being a successful player. Prediction is based on the idea that you can predict or calculate where a player will move to (if they are moving) and then fire there. As a result, you will not miss the player but rather hit them directly where they are moving, dealing the maximum amount of damage.

Check this gif for an example - notice at the end how the player aims to the left instead of where the player was at the same time that he fired, because his opponent was moving towards the left. For another example, click here.

Prediction is the key to dealing the maximum damage and winning your fights - if you can predict your opponent’s moves and in turn fire where they will be to deal maximum damage, you will become a much better player.

Know which fights to join and which fights to stay out of. There will be other players to kill, you don’t have to hunt down every single player. For example, if there are 3 players converging onto another player, don’t run into the middle of the fight - you may be caught up in the blast and be killed by the other players. In general, it is easier to pick off single players (unless you know they are better than you, in which case, it’s better to avoid them) as they have nowhere to run to and you can continue chasing them.

Know When to Run[edit | edit source]

You can't win every fight - if you're losing, know when to give up and retreat. Remember, advanced strategies focus on remaining alive more than killing more people. As a general rule, if you are facing an opponent with more health than you, better weapons (e.g. a grenade launcher vs. green laser), and/or a strategic advantage, it's better to retreat and live to fight another day (check out this gif for an example). However, if you can manipulate them into a trap (e.g. on the edge of The Forest and blast them into the water) and kill them, you can choose to take this option, though it is riskier.

I. Facing down teams[edit | edit source]

When facing a team of players, first decide whether or not you will be able to deal with them without dying or not. If you decide to run and survive, then the teleport ability, grenade/rocket shield jumping, and just running away are all viable options.

However, if you decide to face off the players, the cardinal rule of facing off teams is to never let them attack you from all sides. You can deal with the teamers individually or simultaneously. If you want to deal with the teamers individually, an example strategy would be pushing one away with rockets/grenades then dealing with the other - alternatively attacking one then the other. Whatever you do, remember to keep your enemies in one manageable position so that they don't overwhelm you. If you choose to engage the teamers simultaneously, then make sure to use splash damage weapons like grenade launchers or rockets to deal damage to both at the same time. Again, make sure that you keep all your opponents in a manageable position by preventing them from encircling you.

These strategies are things you can actually do/perform in a game when you are playing a march.

You should always keep your weapons on max reload - one ammo might make the difference between life and death. You may find yourself cornered or chased by a group of players, only to realize that you don't have that pesky grenade launcher/shotgun/etc. fully reloaded, and you die. However, don’t reload weapons in the heat of combat - do it after you’ve finished fighting, or while you’re healing.

There’s no shame in retreating from battle - living to fight another day is preferable over death. When running away, from a chasing player, use the Flamethrower to fan out flames in the direction opposite to the one you are running towards. For example, if you are running to the right side of the map, face backwards and fan out flames to the left. This gives you a speed boost and also prevents chasers. When faced with another flamethrower, just keep on kiting backwards. The flamethrower's flames will move slower than you move, so you'll be able to outrun it while your opponent runs headfirst into your flames.

It is obviously easier to evade incoming attacks if you have a higher amount of agility in your build, but there are always ways that you can evade attacks no matter the amount of agility you have. First, keep track of your opponent’s attacks, and you can predict when they’ll attack. Responding to their attacks is a little tricker - you have to counter-predict their prediction. It sounds complicated, but in essence, all you have to do is to predict where they will fire and move away from that area.

Moving erratically, with sudden stops and jumps, will make it harder for your opponent to predict your movement and aim at you - as a general rule, never move in a predictable pattern (e.g. a circle/straight line). A rule that applies to grenade launchers only is to move in the direction from which the grenade launcher is fired. You will pass under the arc of the grenade projectile and move away from the explosion zone. However, this requires precise timing and execution.

Shield is one of the most useful defensive abilities - it reduces all incoming damage to 10. This prevents all rockets/grenades from dealing massive amounts of damage to you. However, you have to know when to use shield and when to evade. As a general rule, if a homing launcher is fired at you with a curved trajectory, it’s easy to avoid by circling around and around, and you should avoid using shield. However, if the incoming projectile is unavoidable because you’re fighting another player, the rocket projectile has a straight trajectory, and/or you just didn’t see it in time, then you should use shield. As a general rule, don’t’ use shield unless it’s absolutely necessary - this just drains energy you might need later. Check out this gif by Sterminator as an example.

If you’re waiting for your opponent to attack you, then try to bait them into attacking you first. Move suddenly in a direction and then stop, over and over again. Hopefully, this will make your opponent fire a shot at you but miss due to your erratic movement. Then, while they’re reloading, you can attack them while they are reloading and deal damage. Baiting also works when trying to avoid a sniper shot down a long corridor. Move back and forth repeatedly as if you are going to cross the corridor, then suddenly jump across. The sniper will be confused and will most likely miss you unless they are an expert sniper.

All of these strategies require practice! Top players have practiced these strategies for hours, honing them to perfection in accordance with their playstyle. To get the hang of how to execute these strategies, try them out in a match, preferably a deathmatch (the FFA aspect makes it better for practice). If you have any further questions about these strategies or any others, you can contact the author of this article on Discord (Asteria#7630) or by email (hearth1.gaming@gmail.com).